In his texts Tertullian1 mentions that there were fixed names for certain fighting techniques and that the audience would shout these numbers into the arena during the fights. In modern boxing a similar system is in place2 and the most common and basic punches are sorted in a standardized number system. This is handy for training and makes it easier to talk about complex combinations. We do not know which ancient technique referred to which name or number, nevertheless I wanted to take this opportunity to introduce such a system for the gladiatura as well. 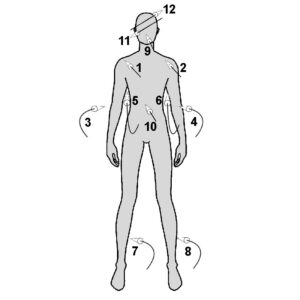 The basic idea is that odd numbers refer to attacks to the sword (left) side and even numbers to attacks to the shield (right) side; with a few exceptions of course. Techniques marked with an „s“ are shield bashes. Some examples for combinations:

I reduced it to 12 basic techniques. Each one includes also variants as i‘ll explain below. Adjustments for different weapons have to be made but the system should work for every armatura. Think of it more as target zones, less as specific single techniques. Some more rare moves like hooking the shield with your pommel or kicks have been omitted to keep it simple. 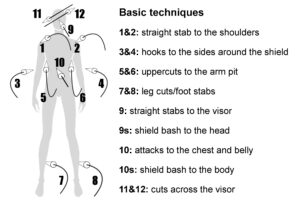 1 and 2: stab to the shoulder, either straight from the front or in an arching motion from above

3 and 4: attack the torso around the shield, target zone goes from below the shoulders down to the butt (boxing equivalent would be a hook)

5 and 6: attacks to the arm pits from below, basically an uppercut

7 and 8: cuts to the calves, also stabs to the feet

9 and 9s: straight attacks to the face/visor, 9s is a shield bash to the head

10 and 10s: attacks to the chest, belly or thighs, usually comming from below; 10s is shield bash,

often also done with both hands

11 and 12: cuts across the head, used to blind the opponent momentarily and set up other techniques 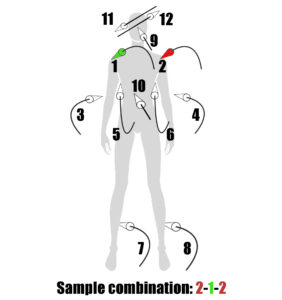 A good method to get started is trying to express your favourite combo with it and see how easy it is. 🙂